What is the role of the gasoline filter and petrol pump for forklift parts?

First, forklift fuel filter. The function of the fuel filter is to filter out moisture and impurities in the gasoline. It consists of various forklift accessories such as upper cover, filter element and sedimentation cup. There are inlet and outlet pipe joints on the cover, the filter element is bolted on the cover, and the middle is sealed with a gasket. The sedimentation cup and the cover are completely bolted, with a gasket in between, and a dirt plug at the bottom for eliminating the precipitation in the cup. Things. There are generally two forms of filtration and precipitation. For gasoline trucks of forklifts, it is best to replace them on schedule. If they are not replaced, the gasoline may enter the forklift without filtering impurities, which may cause the internal parts of the engine to accelerate wear due to certain impurities in the gasoline. It will accelerate the aging of the engine parts. Therefore, the gasoline filter of the forklift may be only one of the small forklift parts for the accessories of the whole vehicle, but its function is very important.
Second, forklift gasoline pump.
1. Function, the work of the forklift gasoline pump is mainly to suck the gasoline out of the fuel tank and make it have a certain pressure. It is pumped into the float chamber of the carburetor through the pipeline and the gasoline filter. At present, gasoline-driven diaphragm fuel pumps are widely used in gasoline engines. Mounted on one side of the engine, driven by an eccentric on the camshaft of the valve train.


2. Working principle, the camshaft rotates when sucking oil, the eccentric wheel moves the rocker arm, the pull rod pulls down the ejector rod through the pull hook, the compression spring makes the pump film descend, the oil chamber volume increases, the pressure drops to the bottom, and the oil inlet valve is sucked open. When the oil delivery valve is closed, the gasoline enters the oil chamber from the oil inlet. When the oil is sent, the eccentric wheel rotates to the highest point, and the rocker arm slopes to the outer end of the ejector hook. The inclined surface of the ram is lost. The pump film is pushed upward by the tension of the spring, the volume of the oil chamber is reduced, the oil pressure is increased, and the oil inlet valve is closed. The oil delivery valve opens and the gasoline is taken into the carburetor float chamber from the valve through the oil outlet. 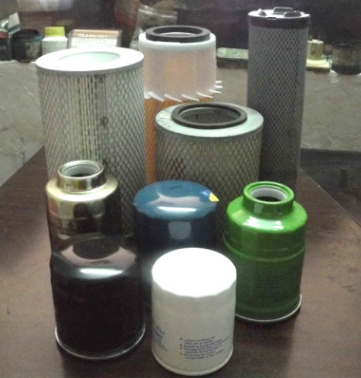 PREVIOUS：What are the motherboard numbers of NICHIYU Forklift? NEXT：What are the forklift engine overhaul accessories